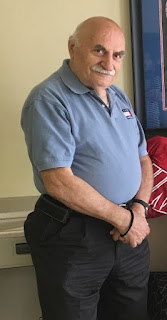 It is with great sorrow, yet with hope in the Resurrection, we inform you of the falling asleep of Mr. Serafim "Sam" Georgio Vlahos.

Mr. Serafim "Sam" Georgio Vlahos, 79, fell asleep in the Lord on Wednesday, February 16, 2022, at Atrium Health Wake Forest Baptist. He was born October 8, 1942, in Fithakia, Evrytania, Greece, the son of Georgio and Konstandina Vlahos. He was married to Georgia Tsiogris in 1966 and immigrated to Winston-Salem in 1967 to start a family. He had worked at Reynolds Airport, Lowes Home Improvement, Jason's Deli, Sam's Club, and was the owner of Captain Toms in Thomasville.  A member of Annunciation Greek Orthodox Church, where he was active and worked with the festival. He loved his church community in which he was devoted to his Lord. Sam was always cheerful, bright, and loving, he enjoyed gardening, spending time with his family, cooking and would give anyone, anything they needed. His favorite saying when someone was taking a photo was "Feta Cheese."  Devoted to his family he was preceded in death by his parents; his sister Katina Pappas; his brothers, Athanasios Vlahos and Stephanos Vlahos and a grandchild, Efthemia Maria Wallace. Survivors include his wife of 56 years, Georgia Vlahos; a daughter, Dina Spanos of Winston-Salem; a son, George Vlahos of Concord; his grandchildren, Sophia Karageorgos (Lawrence Holmes), Georgia Nektaria Wallace ( Timothy Cogar), Evan George Vlahos and Chris George Vlahos; his great grandchildren, Konstandina Karageorgos, Lawrence "Elias" Holmes, III, Bobby "Serafim" Holmes, Luther Sarantis Holmes and Skylar Maria Cogar; his sisters, Maria Georgotoulos and Voula Rigas and many nieces, nephews and friends.

A funeral service will be held at 12:00 PM Monday, February 21, 2022, at Annunciation Greek Orthodox Church with Rev. Fr. George Kouzelis officiating. Burial will follow in Forsyth Memorial Park. The family will receive friends one hour prior to the service at the church. In lieu of flowers donations may be made to Annunciation Greek Orthodox Church, 435 Keating Drive, Winston-Salem, NC 27104. Online condolences may be made at www.hayworth-miller.com